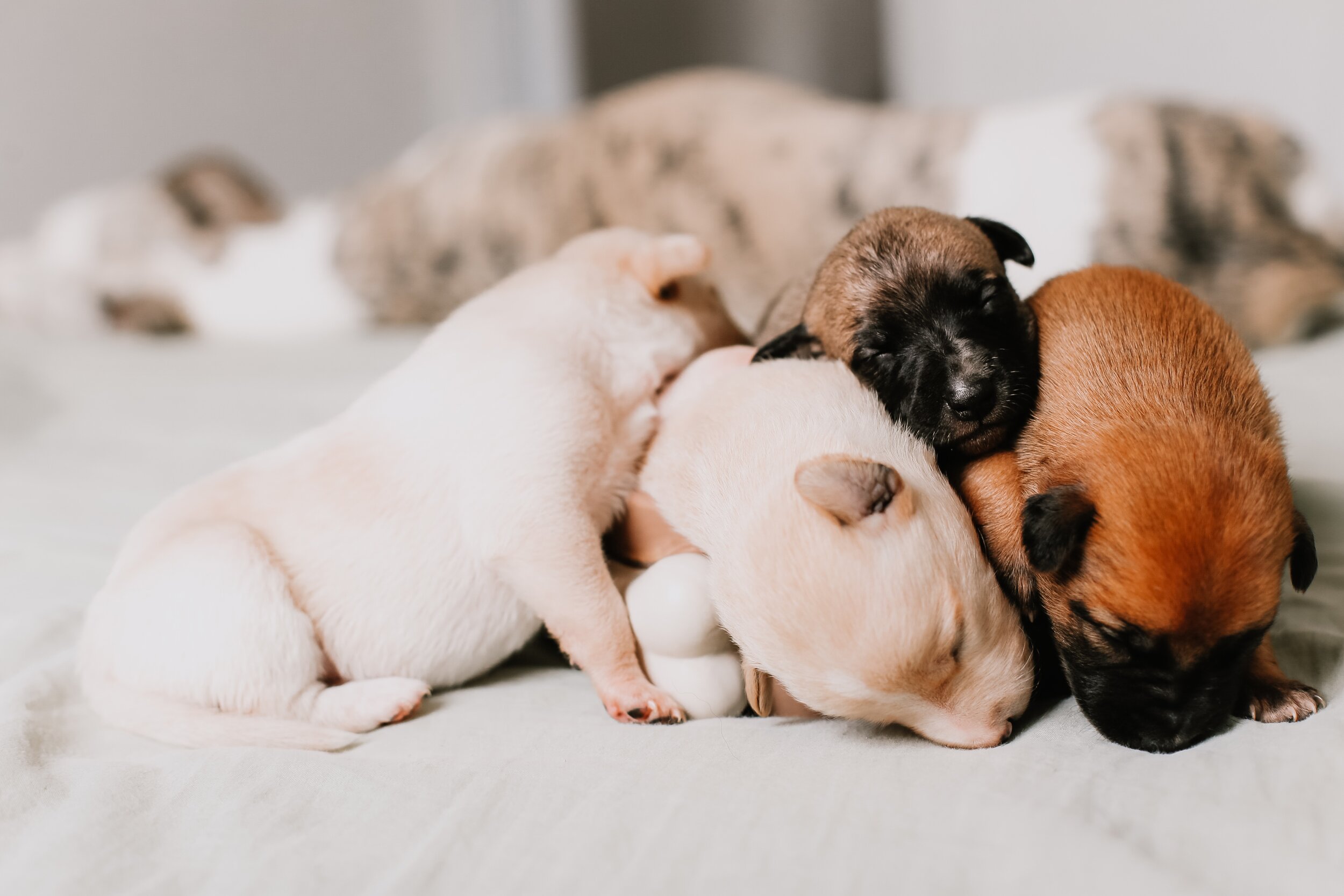 We recently asked our awesome global puppy breeding community (that’s you!) to bare all and tell us your WORST moments breeding dogs has been – what’s the moment where you thought to yourself, “OH SH💩T”.

And you lot seriously delivered…

When reading your responses, we’ve laughed and we’ve cried – and there’s been a few important lessons to learn along the way.

One of the most important lessons we’ve learned from our community is that we all make mistakes. But by sharing our stories, we can all learn, develop and deliver an even greater service to our dogs.

We thought we’d share some of the anonymous submissions below – be warned, there are some real tear-jerkers ahead and there’s not always a happy ending.

As we know, owning dogs and especially breeding dogs has a lot of surprises. This breeder didn’t expect to wake up and discover this in their apartment the day after her dog gave birth.

“The smell after the birth… it was a hot summer night; the air didn’t change, and I live in an apartment. Oh my! The smell was horrible.”

Meanwhile, this breeder is still waiting for the results of this unexpected turn of events…

“My Boston Terrier female was loose, and my daughter decided to let the toy Poodle boy out… they say Bosti-poos are a thing. I’m dreading to find out!”

Another submission was from someone who hadn’t quite read up on the different breed standards and systems in different countries. There’s a lesson to be learned here, but there is also a silver lining to this story.

“My ‘oh sh*t’ moment was purchasing a dog from Russia that I had never laid eyes on. I didn’t have the knowledge of different breed standards in other countries…”

“We ended up with a beautiful, sweet pom… but with only one testicle and no paperwork to his name. Yes, it was a massive loss of cash, but I wouldn’t change him for anything.”

We love our dogs, and we always want to do the right thing by them. This person thought they were by placing one of her dogs into doggy day care while her dam gave birth.

“My Paris was expecting her second litter, so I pre-booked my nine-year-old male Westie into day care. However, while he was there, we got an emergency message saying he’d been exposed to kennel cough. I didn’t worry as he’d been vaccinated but I didn’t realise the vaccine isn’t always effective.”

“He started to cough, gave it to Paris, who then gave it to her 24-hour-old pups. We have to make several trips to the vets as all three puppies developed pneumonia – they all recovered but it was touch and go. The lesson? No more doggy daycare during those first few weeks.”

Bringing puppies into the world certainly has its ups, but sometimes it has its downs too and we must remember this.

“Breeding dogs has so many ‘oh sh*t’ moments. My worst was the day after my dog Lucy had her first litter. There was nine in total, which is huge for Havanese. Unfortunately, two were stillborn and one was really tiny. He had been born breech and aspirated at birth, so was not doing well.”

“Lucy and the puppies were in my bedroom – where all my litters are born. I was checking on them constantly between a couple of minutes of sleep here and there. Lucy had taken the tiny boy out of the whelping box and was trying to care for him under my desk – she was distressed; he was cold. And that was the moment I thought ‘oh crap, he’s not going to make it’. I moved him to an incubator and warmed him up, but after three days of intensive care, he passed away.”

It’s always heartbreaking losing a pup, and a stressful time when a dog is sick. But sometimes, one little fighter proves us all wrong, like this pup:

“My dog had delivered litters in the past and we were ready, with multiple people she trusts standing by to help if needed. The first and second puppy – everything went fine. But things were different for the third pup…”

“Mum did her thing and ate the placenta; everything looked fine until we picked the puppy up to dry him and noticed she had completely removed the umbilical cord, causing a hole in the pup’s tummy.”

Luckily, this breeder raced to the vets in time to stitch up the hole, but the vets warned that due to the significant blood loss, he may not survive. The next few weeks weren’t without their complications.

“We had to syringe feed him as he could no suck from mum – he just inhaled the milk. Unfortunately, he ended up with a chesty cough and I had to learn to tube feed the little guy and give him antibiotics. We agreed we’d wait until his three-week birthday to see whether or not he would have to be put down…”

“I knew he was going to be fine as two days before the dreaded birthday, he ate like it was something he’d been wanting his whole life. He’s now eight weeks old and his new owner thinks his belly button is cute and calls him a little fighter!”

PuppyFat makes it easy and rewarding to manage essential breeding records, jobs, schedules, and buyer data so breeders can stay organized, in control and compliant with local legislation.​ Try our Professional Plan for free for 30 days.